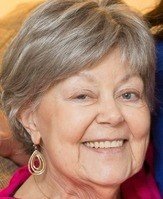 Janet Yocum Robertson, 74, of Columbia, SC, passed away at her home and with her children by her side, on Saturday, May 22, 2021. She fought a long and brave battle against cancer. She was born in Kentucky in 1946 and was a 1965 graduate of Henry County High School.

Janet attended Western Kentucky University, and was a resident of Finchville and Louisville, Kentucky before moving to Greenville, SC. She spent many years as a homemaker, sales representative and later in life was a retail manager and caregiver. Janet was a Kentucky Colonel, loved decorating houses, appreciated the beauty of the beach, was an avid reader, and enjoyed spending time with her grandchildren, especially her youngest Maggie Juk. While living in Kentucky, she was a member of Finchville Baptist Church where she taught Sunday school when her children were younger.

She was preceded in death by her Father, Daniel Yocum, her Mother Pauline Sweazy Yocum, her brother, Michael Yocum.
Janet is survived by her children, Mary Robertson Juk (Steven) of Columbia, SC; Jim Robertson (Susan) of Finchville, KY; grandchildren Braylon and Leland Robertson, and Margaret Rose (Maggie) Juk, a nephew and extended family. She is also survived by close friend Paula Marsh.

A Celebration of Life will take place on Wednesday, May 26, 2021 at 2:00 p.m. at Shandon United Methodist Church, Columbia, SC.
Cremation was chosen and the burial of her ashes will take place at a later date in Henry County, Kentucky.

To plant a beautiful memorial tree in memory of Janet Robertson, please visit our Tree Store
Print
Wednesday
26
May