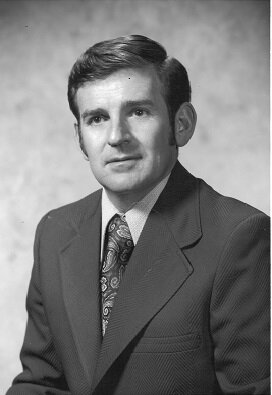 Wayne was the beloved husband of Hazel McManus Broome Baucom for 66 years. He was the dear father of Wayne Franklin Baucom Jr. (Frank) of Charlotte, NC and much-loved father-in-law to Frank’s wife, Holly Baucom. Wayne was a friend / brother-in-love and father figure to his brother-in-law David Lemuel Broome (Wanda, deceased), and cherished brother-in-law to Betty McManus Garmon (Ron) and Thomas Alan Broome (Carol). There are many grandchildren, nieces, nephews, and cousins who survive him and will miss him in this life. His dear friends Lamar and Jeanette Edenfield, Paul and Faye Gragg, and a favorite aunt, Louise Mullis are among those he thought of as family for many years. Wayne was sadly preceded in death by his infant son, Thomas Eric Baucom, his parents Hoyle Layne Baucom and Viola Blanche Carpenter Baucom, his brother Henry Hoye Baucom and sister-in-law, Christine Baucom.

Wayne graduated from East Mecklenburg High School in Charlotte, NC, and while attending high school, he embarked on his career, working for S.H. Kress. After high school, he joined the United States Navy and served as a Torpedoman aboard the Destroyer USS Waller.

After his Naval service, Wayne began working for Frito Lay – and after 42 years, he retired holding Sales and Marketing Management positions during his tenure. After his retirement, Wayne was never one to relax and take it easy; he went to work as a Lead Driver with Dick Dyer Mercedes.

Wayne was a Mason and a Shriner. He belonged to the Springdale Masonic Lodge as a 3rd degree Mason and 32nd degree in the Scottish Rites. He joined the Jamil Shrine Temple 51 years ago.

Wayne, along with his wife Hazel, joined the congregation as a dedicated member of Mt Horeb United Methodist Church in 2004. He served as an Usher and a Lead Usher for many of the years since. He loved meeting and greeting worshippers for services.

Wayne was a fun-loving, kind, and gentle man. He never met a stranger and could converse easily with everyone. He was always ready with a listening ear and an easy laugh and a funny observation or two. He will be remembered for his generosity of spirit – he always had time for those who needed it. He held God and Family first throughout his life, but devoted himself also to his church, his career and mentoring those who worked with him. Those who knew and loved him look forward to being with him again.

Special thanks to Shelly Behling, Chris and Ted Driggers, and Karen Garmon Karpowicz for their help and assistance to the family, as well as to the many other friends who have come to the family’s aide.

The Celebration of Life service will be held on Saturday, April 9, 2022 at Mt Horeb United Methodist Church, 1205 Old Cherokee Rd., Lexington, SC 29072 at 1 pm with visitation beginning at noon. In lieu of flowers, the family requests that any donations be sent as a memorial in Wayne’s name to Mt Horeb United Methodist Church, Congregational Care Team.