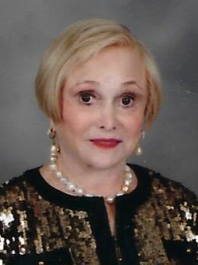 Mrs. Lowenstein passed away on August 19, 2021 only 2 days after she was diagnosed with Covid-19. Born on January 7, 1931, Mrs. Lowenstein was the only child of Rose Riesenberg Leterman, originally from Bells, Texas, and Maurice Herman Leterman, originally from Charlottesville, Virginia. Mrs. Lowenstein’s paternal and maternal great-grandparents emigrated from Europe to America in the 1840’s. Suzie was proud that the Leterman family was prominent in Charlottesville for many years, beginning before the Civil War and her great-grandfather, Simon Leterman, served in the Confederate Army.

Raised in Oklahoma City, Suzie graduated with a Bachelor’s Degree in Social Work from the University of Oklahoma. She met her first husband, Simpson Robert Walker, Jr., when he was stationed at an Army base in Oklahoma. They subsequently lived in Jacksonville, Florida, where they had two daughters. After the divorce, she married William Maxwell Lowenstein, and they resided in Atlanta. She died on their 56th wedding anniversary.

After her daughters were in college, Suzie got a degree in nursing. She also worked for IBM, and as a travel agent. Suzie and Bill traveled all over the world, especially enjoying cruises. Suzie was a member of The Temple in Atlanta, was an avid exerciser and a bridge enthusiast. Four years following the death of Bill, Suzie moved to Still Hopes Retirement Community in Columbia, South Carolina, in 2019, to be closer to family.

For those interested in making a donation in memory of Suzie, the family suggests support of the following: Jewish Family Services in Columbia, Central South Carolina Chapter of the American Red Cross, and The FriendShip in Columbia.

South Carolina Cremation Society of West Columbia is assisting the family.  Family and friends may sign the online tribute wall at www.southcarolinacremation.com

To plant a beautiful memorial tree in memory of Suzanne Lowenstein , please visit our Tree Store