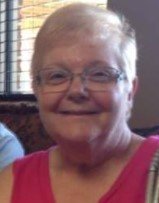 Martha was born to Dale and Thelma Smith on Sept 20,1949 in Gallatin, Missouri.

She grew up as an only child and attended J.C. Penney High School. In July 1985, she married Paul in Rome N.Y. After their marriage, they returned to Germany and then moved frequently due to Paul’s career in the U.S. Air Force. They finally settled in South Carolina. Over the years, she held many various positions in the banking and insurance industry finally retiring from Mutual of Omaha in February 2012.

Martha is preceded in death by her parents, as well as their many 4-legged family that she loved so much over the years. She is survived by her daughter, Shonna (John) Cook of Ridgeway, South Carolina, several grandchildren, her devoted pup, Toby, and Okie, the cat.

Her cremation is being handled by the South Carolina Cremation Society. Per her request there will be no services. Later this year, Paul will take her ashes to her parent’s gravesite in Altamont Missouri and scatter them.

We are grateful for the many condolences received. In lieu of flowers, monetary donations in her name can be made to your local humane organization or a favored pet rescue organization.

To plant a beautiful memorial tree in memory of Martha Kiepert, please visit our Tree Store