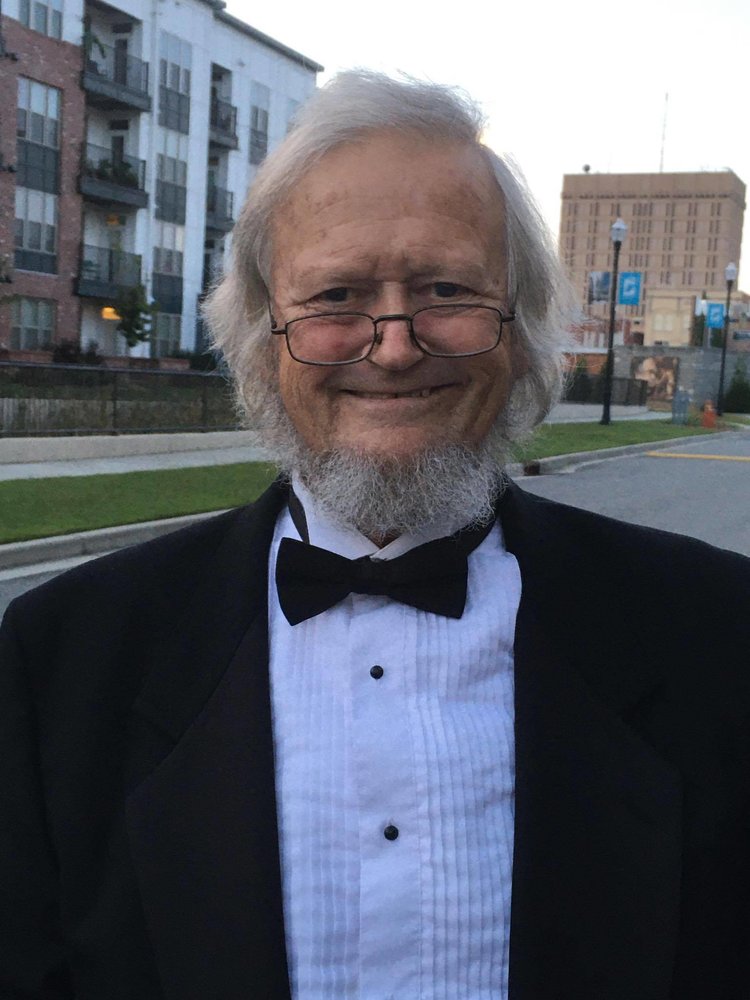 On November 13, 2020, James (Jim) Claude Gill, Jr., loving husband, father, grandfather, great-grandfather, brother, uncle, and friend, passed away peacefully at his home in Columbia, SC at the age of 74 after having lived a full life…full even since his stage 4 cancer diagnosis in August of 2019. He is now safely at home with his Savior and Lord whom he faithfully served throughout his life.

He was born on December 6, 1945 in Baton Rouge, Louisiana, where he grew up with his mother (Helen Glover Gill) and father (James C. Gill, Sr.), and his 3 siblings, Janet, Robert (Mike), and Patti. Affectionately known as “Jimbo” by his family and friends, he began his lifetime love of music as a five-year-old “paid soloist” at church when he was bribed with a nickel to sing “Jesus Loves Me!” His love of music grew, and one of his dreams was to play in a band. In Junior High School, that dream was realized when he saw a sousaphone in the band room and wanted to learn to play it. The band teacher told him that he was too small and that his lips were too thin to play it. True to form, Jim took that as a challenge, successfully learning to play the sousaphone (practicing out in the garage). Later the tuba and the string bass became his favorite instruments in addition to his wonderful tenor singing voice.

His passion for playing the tuba landed him a music scholarship and, as his primary instrument, the tuba enabled him to attend Louisiana Tech University where he received a Bachelor of Music degree. While at Tech, he served as Student Conductor for both the band and chorus under the leadership of Director of Bands, Jimmie Howard Reynolds. He also enjoyed singing in operas, acting, and learning about the details of direction and production of staged dramas and operas.

Following his degree at Louisiana Tech, he followed his passion to serve God through music by attending The Southern Baptist Theological Seminary in Louisville, KY, where he received a Master of Church Music Degree. During his time in seminary, he met his first love, Sandra Owings. They married while he was still in seminary. After seminary, in July of 1970, they moved to Columbia, SC where he took a position as Minister of Music at St. Andrews Baptist Church. While serving at St. Andrews, they had two daughters, Jennifer and Melissa. After 23 years of marriage to Jim, Sandra passed away in 1991. Three years later, he was truly blessed to meet Linda Bass. They were married in December of 1994 and were together nearly 26 years, first as “co-step-parents” for David Bass (Linda’s son) and Cameron Gill (Jim’s grandson), and then enjoying life’s adventures through grandchildren, retirement, and always with love, laughter, and music.

Jim had an impressive career as a church musician. He served as Minister of Music at St. Andrews Baptist Church from 1970-1977. Then from 1977-2006 he served first as Associate Director, and later as Director of the SC Baptist Convention Church Music and Worship Department following the wonderful tenure of his mentor and friend Tom Westmoreland. His many accomplishments included organizing the SC Baptist Allstate Band and Chorus, Honor Children’s Chorus, Younger Youth Singers, instrumental workshops, handbell workshops, handbell and choral festivals, music and arts festivals, and music camps each summer for children and youth. He also organized and implemented a statewide group of church music specialists who traveled throughout SC to assist with the development and training of local church volunteers to work with children’s choirs, handbells, and many other music programs that were being implemented in churches throughout the state. In addition, he organized and directed the SC Baptist Singing Churchmen, made up of Music Ministers and Worship Leaders statewide, and organized the Churchmen’s Orchestra and Handbell Choir. He was also instrumental in founding “SeraphSong,” a statewide choral group made up of women church musicians who have ministered through music for the past 15 years.

Jim has served as an adjudicator and guest conductor for choral and instrumental groups in several states. As a vocalist, he had the distinct privilege to be chosen for a nation-wide select chorus that rehearsed under Robert Shaw and performed Mendelssohn’s oratorio “Elijah” as part of the 100th-Anniversary Celebration of Carnegie Hall.

In his retirement, he was the Director for the orchestra at Lexington Baptist Church, and later, the Director of the Midlands Home School Band. Working with students ages 12-18, he developed an ensemble that combined those grades to perform successfully at state and regional festivals. Students in the Midlands Home School Band included first-chair SC All-State Band members, soloists selected to participate in the SCBDA Master Recital Competition, and two featured soloists with the Carolina Wind Symphony. He retired from the home school band in 2015.

Jim enjoyed being part of numerous instrumental groups over the years including the Palmetto Chamber Orchestra, the Carolina Wind Symphony, the Florence Symphony, the Lake Murray Symphony, the Columbia Community Concert Band, and the Lexington Community Band.

In addition to his passion for music, Jim was an avid fisherman and enjoyed sharing his love of fishing with his children, grandchildren, friends, and with his favorite fishing partner, friend, and brother-in-law, Roy Simmons. He also enjoyed camping and traveling, both recreationally and in ministry, having traveled to many countries including Kenya, Romania, and Taiwan to spread the gospel. One of his most memorable trips was in his RV with Linda, his dog Tip and cat Little Bit, as they spent 3 months traveling through the United States to Alaska and back in 2015. He chronicled this adventure through a Facebook page he created (Gill’s Awesome Adventure) so that he could share their amazing journey with others. Jim was also never one to sit by and watch life happen. He was adventurous and a “fixer.” He loved working on his boat, his RV, or in his yard, often with his dog, Tip, by his side.

Jim was well known for his sense of humor and “dad jokes.” Over the years he performed his “Cajun Jim” routine, bringing delightful jokes about his Louisiana culture to others, as well as performing his children’s music camp favorites such as “My Thip” and the “Wishy-Washy” soap commercial! He loved making people laugh and was able to tell countless jokes, even in his final days.

Jim’s passion for service to others and to God was immeasurable. In his years following ministry at Lexington Baptist Church, he has been a dedicated member of St. Andrews Presbyterian Church PCA where he was involved in the church orchestra and choir. He spent his life serving God and others through his generosity, kindness, compassion, and of course, through his music. His enormous influence and legacy are apparent in the countless messages from friends, colleagues, choir members, music campers, orchestral members, and others who have shared stories about the ways his leadership and influence have touched them. To God be the glory!

Jim was predeceased by his parents, Helen and James Gill and his first wife, Sandra Owings Gill. He is survived by his wife, Linda Bass Gill; his daughters, Jennifer Gill and Melissa Gill Starker (Chris); his stepson David Bass (Sara Beth); his grandchildren, Cameron Gill (Krystin), Noah Starker, Liam Starker, Madeline Starker, Caroline Bass, Benjamin Bass, Elizabeth (Ellie) Bass, and Mary Foster Bass; and his great-granddaughter, Sandra Williams-Gill. He is also survived by his siblings, Janet McClung (Darrell), Robert (Mike) Gill, and Patti Domengeaux (Ricky); by Sandra’s sister and brother-in-law, Janice Owings Haywood and Billy Haywood; and by his sister and brother-in-law, Anna Beth and Roy Simmons, and niece Katie, along with his many nieces, nephews, great-nieces and nephews, and his beloved dog, Tip.

In lieu of flowers, Jim wanted memorial gifts to be made to any of the following: “Daybreak LifeCare Center,” “Sharing God’s Love,” or to either the “Benevolence” or “Missions” ministry funds at St. Andrews Presbyterian Church.