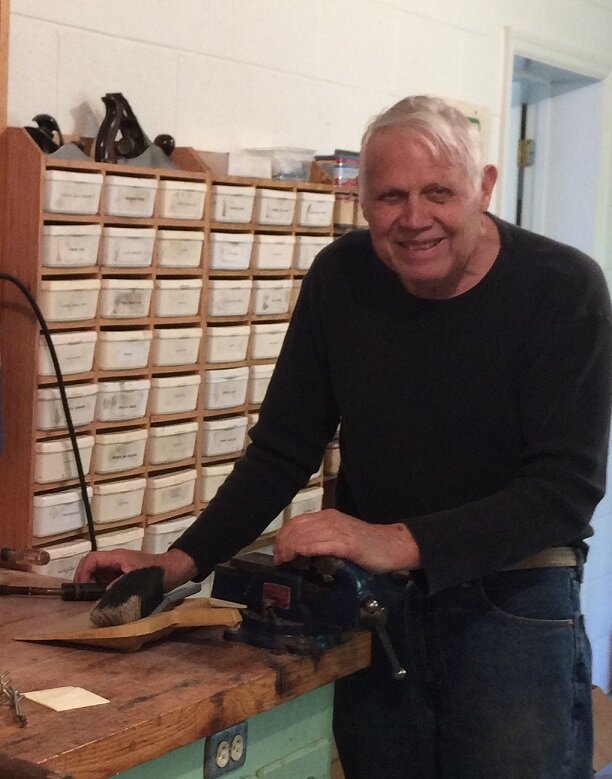 Ralph Lovell was a kind man with boundless talent, profound humility, and a contagious smile. He was a true family man who always made time for his children and grandson, and a skilled engineer who mentored others and lent his calm and capable hand when issues arose. Ralph approached everything in life with a down-to-earth demeanor and a positive attitude. He was eternally optimistic and kept moving forward no matter what came his way.

Ralph died peacefully at home in Columbia, South Carolina, from Parkinson’s Disease. In true storybook fashion, he spent his last few moments watching his only grandchild get married, taking his last breath just minutes after the ceremony ended. His daughter and son-in-law were at his side.

Ralph got his start in Wheatland, Wyoming, born the sixth of seven children to Charles Winfred and Eulala Mildred (McDowell) Lovell. He was active in Boy Scouts and loved the outdoors, hiking, and camping. By the time he reached high school, Ralph was the Troop Leader of his brother Gary’s Scout troop.

Ralph was a natural-born engineer who could fix anything and make improvements at the same time. He worked in his father’s machine shop during high school and earned his machinist card by the time he graduated. Around the same time, he collaborated with one of the engineers at the shop on the development of the Water Pik flosser.

A product of his generation, Ralph joined the army in 1954 after graduating from Ft. Collins High School. He spent two years stationed in Stuttgart, Germany, before being discharged. Upon his return home, he married Jean Booth, and they settled in Ft. Collins, Colorado. The young couple made quick work starting a family. Their first two children, Linda and John, were born while Ralph attended Colorado State University. He graduated with a degree in mechanical engineering in 1960. Two years later, Anne came along, and the family moved to Boulder, Colorado where Ralph worked as an engineer at the Rocky Flats Nuclear Plant.

Ralph quickly rose through the ranks at Rocky Flats to become the Manager of Design Engineering. His reputation as an expert in engineering and robotics extended well beyond the nuclear industry and in 1968, the Apollo program asked Ralph to consult on the launch system for the Saturn rocket.

In 1970, Ralph and Jean divorced. The end of an era prompted further change for Ralph. He let his hair grow and embraced the ’70s lifestyle. He also met Marge Patzke, and the two bought a farm and horses for his kids. The farm was the source of many adventures for Ralph and his family. His children have many fond memories from this period.

Ralph continued working at Rocky Flats until 1976, when he and Marge got married and moved to Knoxville, Tennessee. Ralph took a job there developing environmental remediation systems for IT Corporation. During his tenure with IT, Ralph led the clean-up effort at the notorious Times Beach site, noted as the one of the worst environmental disasters in our nation’s history.

In his spare time, Ralph enjoyed gardening, cycling, hiking, travelling, and restoring his Austin Healey sports car. He was also a talented woodworker who made beautiful pieces, including cabinets and furniture for his home.

In the mid-90s, Marge was diagnosed with ALS, and Ralph became her loving caregiver until she died in 2000. After Marge died, Ralph discovered ballroom dancing, and earned the title of “Best Newcomer” at his first competition.

In 2001, Ralph retired, committing to his hobbies full-time. Later that year, he met his beloved companion, June Parker. They ballroom danced around the world for the next 20 years.

After June died in 2021, Ralph came to live with his daughter Anne and her husband Michael in South Carolina. He stayed with them until his death.

Ralph is predeceased by his parents, Charles W and Eulala Lovell, his wife Margaret “Marge” (Patzke) Lovell, and his beloved companion June Parker. His sisters Mildred Wray, Charlene Brown, and June Geisick, and brothers Wesley and Donald Lovell also went before him.

Ralph’s family and friends will miss him dearly. He was a devoted father, grandfather and brother, a kind friend, and an admirable example. Those who knew him remember his quiet, loving, and constant presence; and the grace he displayed in all situations. Ralph’s children know that their dad was one of the great ones, and they strive to live their lives with the dignity, joy, and pride that he inspired.

Ralph’s family extends a special thank you to his caregivers from First Light Home Care, especially Birdie, Carmen, and William, who provided loving care and companionship over the past year. The family would also like to thank the staff of Traditions Health Hospice for helping Ralph stay in his home.

A memorial service will be held Wednesday, October 26, 2022 at Thompson Funeral Home (845 Leesburg Rd, Columbia, SC 29209) at 2 P.M. There will be a visitation before the service at 1 P.M. The Memorial Service can be viewed online at Memorial Service (https://client.tribucast.com/tcid/4619621904)