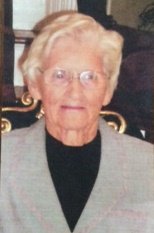 She was born October 6, 1924, in Monetta, SC, to the late Ettie Yonce and Curran B. Spradley. She attended Monetta-Ridge Spring schools and after graduation received an Associate Degree in bookkeeping. She was married to the late Harold H. Grice on March 12, 1943, and was widowed in June of 1981.

Among her many accomplishments she was a Tug and Truck operator at Chatham Field Army Airbase, Georgia while her husband was overseas during WW II; a school bus driver for Greenbrier School; the first female licensed General Contractor for Winnsboro in 1976; first female Woodyard Manager for WestVaco Paper Company in 1979; and at the age of 80, made her second hole-in-one at the Fairfield Country Club.

Mrs. Grice was a member of Sion Presbyterian Church of Winnsboro, SC. During her lifetime, Norma was an active leader in Sunbeams at Crooked Run Baptist Church and a Brownie and Girl Scout leader. She was a member of several card clubs, bowling league, and Fairfield Country Club where she served as President of the LGA, and on the Green’s and House Committees. Norma also served as a lifetime member of the South Carolina Senior Sports Classic (Senior Olympics). Other than golfing, she enjoyed working in her yard, working jigsaw puzzles, fishing at Spradley’s Pond, and going to the beach with her sister and family.

Norma will always be remembered for touching and inspiring people of all ages with her strong determination to live life to the fullest.

The family wishes to thank the staff of Hospice of SC for their compassion and care during the last several months.

A memorial service to celebrate Norma’s life will be held on Sunday, September 8, 2019 at 2:00 pm at Sion Presbyterian Church in Winnsboro, SC, officiated by Rev.

Rebekah Carpenter and Pastor Jimmy Burroughs. Visitation to follow in the Fellowship Hall with a special time of sharing “Norma” stories and memories.

To send flowers to the family or plant a tree in memory of Norma Grice, please visit Tribute Store
Print
Sunday
8
September