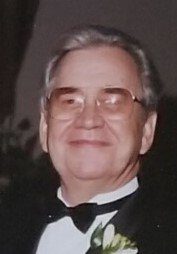 Claude Everette Sandidge, 79, of Columbia, South Carolina, affectionately known as “Honey” by his beloved wife and grandchildren, died at his home on Wednesday, May 1, 2019.

Claude was born December 28,1939 in Tunica, MS to Benjamin Lamar and Katherine Iona Spell Sandidge. He played football and graduated from Tunica High School. He moved to Salinas, CA and graduated with a business degree from Hartnell College.

It was there that he met and courted Sue Cathey. They married August 29,1964 in nearby Carmel, California and settled in Salinas where he began his career as a produce broker. Eleven years and three children later, a job change and the family’s wood-panelled station wagon took them cross country to Chattanooga, TN. Eventually, the family settled in Columbia, SC after Claude purchased The Lee Hamblin Company. He  renamed it The Sandidge Company and worked there until his retirement.

Claude and Sue found a church to call their own when they walked in the doors of Northside Baptist, where they became members and served wherever or whenever needed. Claude served as deacon chairman and on numerous other committees, including the notorious Committee on Committees. He loved his church and taught Sunday School there for over 40 years. His commitment and love for his church and its people impacted those around him.

Claude was an avid reader who loved a good biography and Ronald Reagan. He had an acerbic wit and was always at the ready with a good story, usually delivered with a twinkle in his eye and perfect comedic timing. He cherished his family and relied on his faith in Jesus Christ; he was always eager to talk about both.

His life will be celebrated on Sunday, May 5th at 2:30 pm at the old Northside Baptist Church, (now Church of Christ Park Street), 1303 Sunset Blvd., West Columbia, SC. Family will visit with guests beginning at 2:00 pm and after the service. Flowers may be sent to 113 Canterfield Road, Columbia, SC 29212. In lieu of flowers, donations may be made to the Global Missions Fund at Northside Baptist Church, 4347 Sunset Blvd., Lexington, SC 29072.

To send flowers to the family of Claude Sandidge, please visit Tribute Store
Print
Sunday
5
May