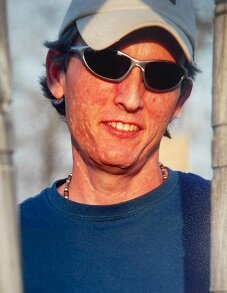 First and foremost, young Drew was an athlete. Although, not much of a team player, in sports and in life, he excelled at baseball at an early age. He found his next adventure in BMX bike racing over the southern southeast. Along with friends, namely Ricky Poole, he carved out a dirt bike track, and helped to build one of the first halfpipes (possibly the first) for skateboarders in Ricky's Columbia backyard. He was Columbia-famous for his front page handplant featured in the local paper. He boasted to his mother, Kathy, that he was more important than the political or "newsworthy" events of the time. After all, he made the cover. There were many trophies. So many trophies that an overflowing box of 2nd and 3rd place rejects were left on the curb in a move across the street. When Erin asked as a 5 year old, if she could have the discarded awards, Drew replied "Do you see your name on them?". Spoken like a proud athlete and rightfully so.

Drew was a troublemaker from the beginning. He once sprung naked from his crib, out the front door, leaving only a yellow trail in the snow for his mother to find him. He was a prankster, a daredevil, a rebel, the life of the party. There is the "myth" of the goat on the rooftop at Dreher High School. Or was it a greased pig? Either way, Drew played a big part in sneaking a farm animal inside the school. There wasn't a public rooftop he couldn't sneak onto. With an audience in the yard at one of the Monroe St. houses, Drew jumped off of the roof, landed in a tuck and roll, and quickly jumped up like he was a stunt double who had done it a hundred times. He probably had. His friend, Kirk, jumped next and immediately broke his arm. Drew led a walkout of Killer Kaminsky's 9th grade English class, protesting Beowulf. No one did that. Yes, she was appropriately named. Erin made the mistake, 12 years later, telling Kaminski that she was related to Drew and Mary Coker (who had also had her turn with Kaminski) and was promptly scoffed at, moved to the first seat in front of her desk, and watched like a killer hawk for the rest of the year. Oh, and who was that guy at the warehouse Halloween party two years in a row, in full costume, dancing and jumping on stilts? You already know.

As an artist, Drew created beauty out of the otherwise boring or redundant. He had a great eye. His tools were paint, mixed media, sculpture, found art, and graffiti. Dali, Kandinsky and Picasso were influences. Drew was awarded the first full scholarship of its kind at The Governor's School of The Arts at Furman at an earlier age than most. He was asked to apprentice for an artist in New York; all at the age of 15. Drew dedicated his talent to paint a human-sized treefrog for the Frog Jump in Springfield for a promised free hamburger. He was an avid "trash" collector: furniture, fixtures, flatware; it was free and for the taking. He turned one man's pot rack into a gift of repurposed work of yard art. You can't mention Drew without his love for music. Music is art. Art is life: Pink Floyd, Led Zeppelin, Bowie, Hendrix, The Cars, The Stones, The Beatles, Beastie Boys, the list goes on and on.

Drew never met an animal he didn't like. Extraordinarily so, that in the late 80s/early 90s, along with his sisters' help, they housed three dogs, too many cats to count (maybe 12?), a cockatiel, a duck, a guinea pig, a rabbit, and for a very short time for obvious reasons, a squirrel. Ther was an equally impressive pet cemetery behind the garage. Drew also worked at Riverbanks Zoo. You might remember "Drew, the guru from the zoo. How do you do?", his greeting he coined and used for years long after his job ended. He was particularly fond of dogs; underdogs like himself that just needed a little love and understanding, a home and some treats. Drew must have been the original dog whisperer, far before Cesar Milan. He trained Erin's dog in two days, one of many of his pack over the years.

Drew was an unpaid part-time philosopher and wordsmith. See "Drew, the guru..." above. Were you looking for a nifty pun including your name? Or a quick rhyming greeting or goodbye on the fly? Drew was your guy. Take a seat "See ya later, alligator". Drew always had something better; a witty, quick retort. His intelligence, desire for knowledge, and curiosity about the unknown had no bounds. Late night talks about alien lifeforms and the great beyond. A quick religion 101 review with a side of conspiracy. Drew always had a theory.

As a son, brother, uncle, cousin and friend, Drew found love and community. He never met a stranger, and if he did, he probably gave him a key to his house. He was compassionate to a fault, but what a fault to have. Drew loved the outdoors, time on the family farm with his little brother Lacy and the mountains most of all. He enjoyed small doses of family get togethers, most importantly second helpings at dinner, exercising his massive, sweet tooth (key lime pie, banana pudding and snickers all tie for first) and the quick naps in the chair that followed. He loved his family, namely his mama, Kathy, his nieces, Elliot and Kendel, and his nephew, Noah. We all love him right back.

Drew triumphed as a warrior over mental illness. He fought demons in mental health despite his misfortunes. He often found wisdom, love, knowledge and humor in the face of adversity. It was a long and difficult battle, but he finally found peace.

Save your flowers. If inclined, please send donations in Drew's memory to Work in Progress http://workinprogresscolumbia.com or  Homeward Bound http://homewardboundrescuesc.com

South Carolina Cremation Society is assisting the family. Family and friends may sign the online guest book by clicking on the "Tribute Wall' tab above.

To plant a beautiful memorial tree in memory of Andrew Williams, please visit our Tree Store