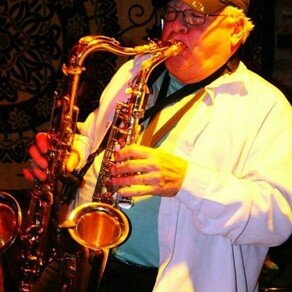 After serving four years in the United States Army, Robert got married and began his career. He started out in the Parachute industry with over 3000 sport jumps and several jumps testing the maneuverability of newly designed parachutes. He then worked in the appliance repair business most of his life and ended his work career with Sub-Zero Freezer Company Inc. Robert also had an amazing musical career playing saxophone for over 60 years. During that time, he played with James Brown, The Drifters, The Platters, The Temptations, Huey Lewis and the News, Aretha Franklin, Taylor Dane, Joey Dee and The Starlighters, The Marshall Tucker Band, Elliott and The Untouchables, and many more.

He lived an amazing life!

Robert married Bernadette Christiana. They had 2 sons. Sean D. Dickey and Randolph A. Dickey. They lived in Massachusetts and soon moved to Connecticut in the late 1970’s. Robert was heavily involved with the music community and the Exchange Club. In 1985, Robert's career led him to Georgia where the family lived in several parts of Gwinnett County. After both his children were out of the house, Robert and Bernadette moved to Florida for his final days with Sub-Zero before he retired. Once he retired, he moved to Lexington SC where he became a saxophone icon for over 20 years.

Robert was preceded in death by his parents, his sister, Roberta, and his brothers, Randolph A. Dickey and Roger Dickey. Robert is survived by his current wife of 10 years Xinchun Dickey, brother, Ritchie, brother, Raymond, sister, Rita, sister, Regina, sister, Rosanne, and sister, Rosie. He is also survived by his children, Sean and Randy, as well as his stepson, Siyuan. He has six surviving grandchildren, Joey, Brittney, Macie, Daniel, David, and Donovan.

South Carolina Cremation Society is assisting the family. Family and friends may sign the online guest book by clicking on the "Tribute Wall' tab above.