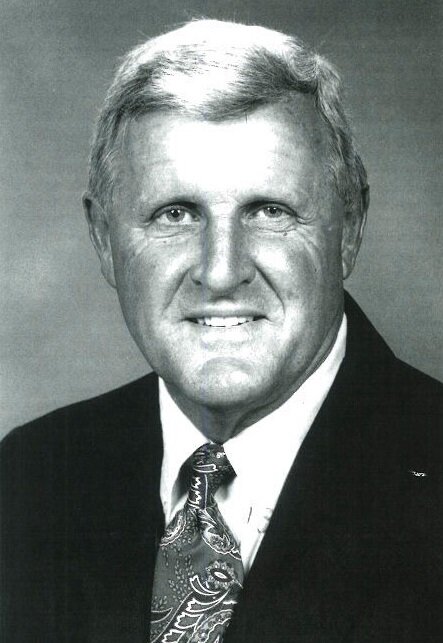 Walter William (Bill) Tarrer, Sr. passed away July 9, 2022 surrounded by his family. Born September 27, 1934, in Columbia, SC, to Walter Childs Tarrer and Katherine Gibson Tarrer, he grew up in Newberry, attending Newberry High School through his junior year and graduating from Rock Hill High School. He was an accomplished athlete, playing football at both schools and in the Shrine Bowl.

Bill received an athletic scholarship to the University of South Carolina and began his freshman year in 1952. He played four years of football as a running back, defensive end, and punter under Coach Enright. He lettered in three sports at USC: football, baseball, and golf. He was also a member of the ROTC and the Sigma Chi Fraternity. Bill graduated from USC in December 1956. He remained an active member of the Association of Letterman and served as president in 1993. Bill annually gave to the Association to help provide the same athletic scholarships he had received.

Bill met Elsie Jones Simpson while both were attending USC and they married in February 1957. Bill served four years in the United States Air Force. After the Air Force, he and Elsie moved to Greenwood, SC, and raised their daughter Kathy and son Bill Jr. He worked for 33 years with John Hancock Financial Insurance Company. Bill was a long-time member of Greenwood Country Club and spent many enjoyable hours on the golf course. Bill purchased a house on Lake Greenwood in 1981 and moved there permanently in 1993.

Bill loved lake life and lake life loved Bill. While he enjoyed fishing off his dock with his son or just sitting and watching the sun set over the lake, he especially delighted in regular visits with Kathy and her family and teaching his twin grandsons how to drive his boat along with navigation responsibilities while on the lake. He later gave the boat (a 1995 Carolina Red Stingray) to his grandsons while they were attending Clemson and they still use the boat regularly on Lake Murray. Bill’s son lived with him until his premature death at the age of 51. After the death of his son, Bill’s kind and loving neighbors at Lake Greenwood checked on him often.

In July 2019, Bill went to live with his daughter and son-in-law in Columbia, SC. There he was able to visit with his adored grandchildren on a regular basis. Bill was known affectionately as “Granddaddy” by a generation of his grandsons’ friends. The multi-generational family had many great times together and took several memorable vacations. The family is incredibly grateful for the time he was with them. Once again, Bill was supported by kind and caring neighbors, one of whom shared the State Paper with him each day for over 2 years.

Bill enjoyed all sports, especially Carolina football and baseball, and playing golf. He was also an avid reader. He was never without a paperback book in his hands, usually reading a western saga or thrilling spy adventure. He was a member of the Episcopal Church of the Resurrection in Greenwood, SC, for over 40 years.

Bill is survived by his daughter and son-in-law, Kathy and Bubba Locklair, grandchildren Jonathan (Jeanna) and David Locklair, niece Leah Vazza (Steve), and nephews Jeff Gabriel and Bill Simpson (Diane). He was predeceased by his parents, stepmother Lib Tarrer, his wife of 36 years Elsie, his son Bill Jr, his brother Keith Tarrer (Lou Schmitt), his sister Barbara Gabriel and his nephew Chris Orr.

Funeral services will be held at Seven Oaks Presbyterian Church in Columbia, SC on July 20 at 11:00 am with Reverend Jana Creighton and Commission Pastor Jim Blackwelder officiating. The family will receive friends after the service.

The family is grateful to the attending doctor, nurses, technicians and staff of 6th floor East Tower at Lexington Medical Center for the kindness and compassion Bill received while in Comfort Care. In lieu of flowers, the family asks that memorials be made to Sharing God’s Love, 147 Friarsgate Blvd, Irmo, SC 29063 or Seven Oaks Presbyterian Church, 530 St. Andrews Road, Columbia, SC 29210.