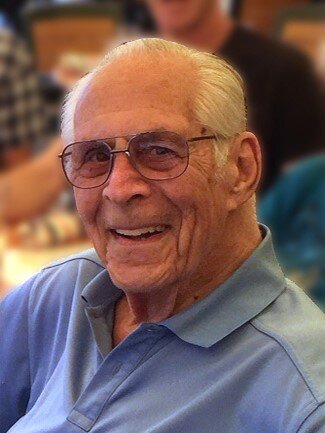 Stan served as a sergeant in the U.S. Army during WWII. He was a medic as well as a cartoonist and editor of the army newspaper. In 2012, he participated in a Veterans Honor Flight to Washington D.C. After serving in the Army, Stan met and married his wife Elaine Silverstein. They had four children and were married almost 49 years until her passing.

As a freelance graphic designer with offices in N.Y., N.J. and S.C., he worked on such accounts as Texas Gulf, Continental Can, Dictaphone, Xerox, American Sewing Guild and Marks/Mundial. He was a published cartoonist with works appearing in the Saturday Evening Post and elsewhere.

Stan was a Renaissance Man who enjoyed jazz, art, photography, tropical fish, woodworking, fishing, boating, puzzles, games, training show dogs, fine scotch and quality beer. He was spontaneous, loving and fun, and used his many talents to bring joy to family and friends.

In 1998, Stan and Terry Ross were blessed to meet through friends in Columbia, S.C. They married in 2000 and found a new life together. They enjoyed live music, museums and world travel and made friends wherever they went. They hosted friends at an annual spring “Azalea” party. Family vacations in Maine provide countless memories and everlasting traditions that continue with the families of his descendants. Always cherishing family, Stan and Terry would toast at each meal "to us and ours.”

Burial will be held at Fort Jackson National Cemetery in Columbia S.C. on Tuesday, June 7 at 3:00 pm, followed by a celebration of Stan's life at his home, 2603 Woodland Hills East, at 5:00 pm. A separate burial will be at Princeton Cemetery in Princeton, N.J.

Memorial contributions in Stan’s honor may be made to the Tree of Life Synagogue, Columbia, S.C.