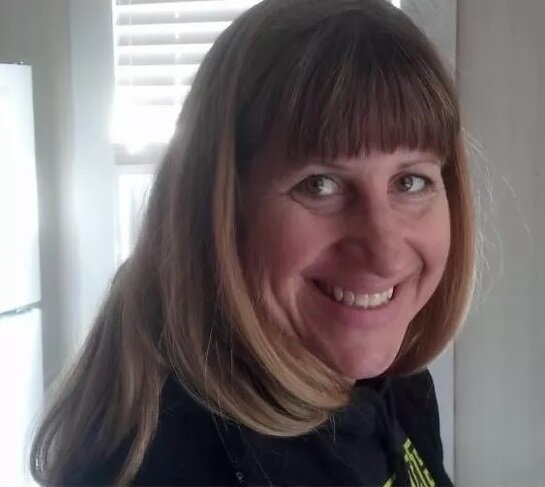 Kimberly Carol (Kenyon) Ordile, age 55, of Lexington, South Carolina rose to her feet and ran to the arms of Jesus on Friday, May 13th, 2022.  She was at home with her family and parents when she ended her fight with ALS.

Kim was born to Ronald and Carolyn (Kauffman) Kenyon on November 12, 1966, on Williams Airforce Base in Chandler, Arizona. Four sisters would follow over the next twelve years: Kristin, Kerri, Koni, and Kandace. Kim was an incredible athlete at Connell High School.  She excelled in volleyball, basketball, and softball.  She received many awards and led her teams, specifically softball, to state championships.  Kim went on to play basketball in college at Western Baptist (now Corban University) in Salem, Oregon.  She was adored by all and was crowned Homecoming Queen her senior year at Western.  Kim graduated with a B.A. in Education.

After college Kim spent several years teaching abroad in both Brazil and Portugal. She returned to the states to be close to family and continue her influence through education.  Kim taught 6th grade at North County Christian School in Ferguson, MO for several years.  With her summers free Kim made her way down to work at Word of Life Florida summer camp.  It was there, in the summer of 1999 she met Louis Ordile and fell in love. After camp that summer Kim moved out to Seattle where she had already committed to a teaching job.  However, that assignment was short-lived as she just wanted to be near Lou.  Kim moved back to Florida in the spring of 2000.

Lou and Kim were married on December 16, 2000, on the campus of Word of Life Florida (WOL,) where they first met. They remained in Florida both accepting jobs at WOL.  On February 16, 2002, Joseph Michael was born.  Eleven months later, on January 17, 2003, Jessa Joy joined the family. Kim and Lou stayed on staff and WOL until 2004 when they both took jobs at Citrus Park Christian School in Tampa FL; Kim as the guidance counselor and Lou, vice-principal.

In 2011 the Ordiles made a big move to Atlantic City, NJ.  Kim founded and directed the Pre-School program at Atlantic Christian School.  It was during this time that Kim first felt that something was changing in her body.  She began seeking answers and visited countless doctors for over two years.  Finally, in May 2015, she received confirmation of her ALS diagnosis.  The Ordiles remained in New Jersey for one more year before moving down to South Carolina to be near Kim’s parents.

As Kim’s body began to succumb to the effects of ALS, her spirit refused to.  She continued her lifelong quest of covering everyone around her in the love of Jesus.  She had a devotional published (Rise Up and Walk) that documented her journey with ALS. With the help of her eye-gaze computer, she was able to write what God was teaching her and to encourage others to rise above their own difficulties and challenges.  Kim never asked for pity or sympathy but remained unexplainably joyful, hopeful, and resolute in her trust of the goodness of God.  Kim put her trust in Jesus as a 5-year-old little girl and her 50-year walk with Him culminated when she saw Him face to face on May 13th.

“ That is why we never give up. Though our bodies are dying, our spirits are being renewed every day. For our present troubles are small and won’t last very long. Yet they produce for us a glory that vastly outweighs them and will last forever!”  2 Corinthians 4:16-17

In lieu of flowers, please donate to the ALS Foundation in Kim’s honor, thank you! http://donate.als.org