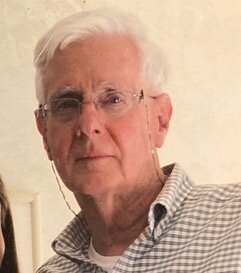 Monroe E. (Mike) Freeman Jr, 84, passed away in Columbia, SC on April 20, 2022, peacefully and surrounded by his children and grandchildren. Mike exemplified what Ralph Waldo Emerson defined as the purpose of life: “…to be useful, to be honorable, to be compassionate, to have it made some difference that you have lived and lived well.” He was all of those things, and he leaves us all the better for his life lived well.

Mike a loving father and grandfather and a devoted husband to Baba, his wife of 60 years. For 50 of those years, he was an engaged and active citizen of Reston, Virginia. Professionally he was a well-respected lawyer and judge. He was a man of faith. Mike embodied the selfless love of others that would seem self-sacrificial to most, but for him was simply at the core of his being.

Mike was born in Amherst, MA in 1937, to Col. Monroe Edward and Christina (Gray) Freeman. He grew up in Washington DC, trying to keep up with his older sister Mary. He attended public schools in Washington DC and graduated from Valley Forge Military Academy in 1954. He went to Georgetown University to study history, where he excelled in academics and as Captain of the Georgetown swim team. He received the Duffy Award for the top Scholar-Athlete of the Class of 1958. Mike loved swimming and never stopped, lapping a mile a day for more than 40 years.

While at Georgetown, Mike found another lifelong love: his wife, Baba. They met at a church function and were married in 1959. Almost polar opposites, they complemented each other’s unique characters. Neither suffered fools gladly and while they argued passionately about matters large and small, they never went to bed angry.

After college, Mike served as a Captain in the US Army. During his Army service, he and Baba lived in Texas, and later Germany. After leaving the Army, Mike attended Harvard Law School, graduating in 1967.

He returned to Washington to work at the law firm of vom Baur, Coburn, Simmons & Turtle, in government contracts and litigation. In 1980 he was appointed to the Armed Services Board of Contract Appeals and served as an Administrative Law Judge until he retired in 2016 at the age of 78. He then was a valiant caregiver to Baba until her death in 2019.

Mike and Baba were early residents of and advocates for the new town of Reston VA, settling in Waterview Cluster in 1967. In the words of one reporter, Mike had a case of chronic community activism for a myriad of Reston organizations, including St. Anne’s Episcopal Church, FISH, and soccer and swim teams. He was a volunteer driver for the first local RIBS bus, and an elected board member of the Reston Association, serving as Board President 1988-89. He also served on the board of the Health Systems Agency of Northern Virginia.

Mike was a generous person and leaned into the adage of ‘living simply, so that others may simply live.’ He didn’t indulge in many personal leisure activities, driven by a sense of duty and a desire to make the most of his time. When he allowed himself to, he enjoyed chess, reading history and the classics (often in Latin), and watching the Redskins with a big bowl of ice cream. He loved to laugh, and was happiest when sitting around the dinner table with family and friends.

Mike is survived by his children: Emily & David Jones of Columbia, SC and their daughter Anna Frances Coleman of Greensboro, NC; Roger & Laurie Freeman and their sons, Jared & Michael Freeman of Hingham, MA; Andrew Freeman, his children Madeleine, Ethan & Sabina Freeman, and their mother, Amiee Freeman, all of Reston, VA; and a sister, Mary Freeman Spitzer of Philadelphia PA; one great-granddaughter and eight nieces and nephews.

We give thanks to the dedicated staff at Laurel Crest and Lutheran Hospice in Columbia for their compassionate care over the last year.

A celebration of Mike’s life is planned for Saturday, May 28, 2022, at 2 pm, at St. Anne’s Episcopal Church in Reston, with a reception to follow. In lieu of flowers, memorial gifts may be made to the Embry Rucker Community Shelter (www.cornerstonesva.org) in Reston, or another service organization of one’s choice.

To plant a beautiful memorial tree in memory of Monroe Freeman, Jr., please visit our Tree Store
Print
Saturday
28
May