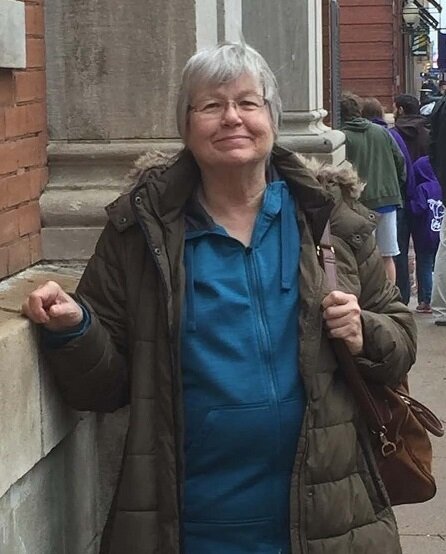 Kathy Jane Steele (nee Borg) left this mortal coil on the morning of April 4th, 2022 at the age of 71. She was surrounded by her children at the time of her passing. In her final days, she was staying in Winnsboro, South Carolina with her daughter, son-in-law, and infant grandson.

Kathy was born September 19th, 1950 in Chicago, Illinois to parents Robert Norman Borg and Jane Rathgeber Borg. Her birth was succeeded in late 1951 by her brother, Robert Earnest Borg.

In the early 1960s, the family initially relocated to Houston, Texas, and then a year later to San Francisco, California. Eventually the family would relocate to Santa Clara, California where both she and her brother attended Buchser High School, graduating in 1968. It was during this time-period, she met her future husband, John Sanchez. They eventually wed in 1971 but divorced in 1975 after having a child together, Eli Sanchez. It was here she met her life-long friend Terri Fitzmaurice of whom she kept in touch with right until the time of her passing.

Kathy had many interests: She was an avid music lover and film lover. She had an almost encyclopedic knowledge of Marx Brothers one liners and would be known to venture off into a Monty Python skit if the mood struck. She also was an avid reader and editor and had once been the editor of the Reed Magazine at San Jose State while she was a student. Most recently, Kathy was completing preliminary research on writing a book about Noble Johnson, the noted African-American character actor/director who had appeared in a handful of films in the 1930s and was hoping to enter into a Masters Program to also help facilitate this work. She regularly attended the opera and symphony in both Columbia, South Carolina and Atlanta, Georgia

After the great Loma Prieta Earthquake of 1989 that struck the San Francisco Bay Area, she relocated the family to Orangeburg, South Carolina. This was where both her parents and her brother had relocated in previous years.

She began working for the University of South Carolina in 1990 and continued off and on employment with them until her passing.

In May, 2021, Kathy was diagnosed with Stage 4 lung cancer along with having it spread to her brain. She began treatment and ultimately was hospitalized for chemo-related intestinal issues that kept her incapacitated from September through December of 2021. She was able to be released to her daughter Grace and enjoyed her remaining months getting to know her newborn grandson Felix who had been born just prior to her hospitalization.

Just before her passing, she was able to meet and hold her most recent grandson, Quinn who was only two weeks old at that time.

The family has decided against any memorial service and will have Kathy cremated and scattered at Botany Bay, South Carolina at a future date.

In lieu of flowers, please donate to the American Cancer Society  in her name.

Kathy’s dying wish was to have her friends and loved ones play “Stars and Stripes Forever” on kazoo.

To plant a beautiful memorial tree in memory of Kathy Steele, please visit our Tree Store