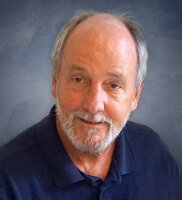 On Thursday, November 3, 2022, Graham Malcom “Andy” Pratt, a beloved father, grandfather, husband, & brother went to join his God after a fierce battle with Acute Leukemia. He was born to George “Jiggs” and Louise Pratt on July 26, 1949 in Atlanta, GA.

Andy attended St. Thomas More Catholic School (54’-66’), St. Pius X Catholic High School (class of '67) and graduated from Emory University in 1972 . An avid reader and traveler, Andy was passionate about experiencing all the world had to offer. In his early years, he was known to take off without a plan, leaving the fate of one cross country move to a literal flip-of-a-coin. He spent time backpacking Europe, hitchhiking in Austin, Texas, while living off red beans & rice, and even spending one night in a New Orleans jail (all because his friend punched a horse). Andy finally landed back in his hometown of Atlanta and went on to have two children, Jennifer and Bill, with his first wife Judy Davis. Andy was well known and loved in the Buckhead community, both socially and throughout the restaurant industry. He spent time at Victoria’s Station, Anthony’s, Brandywine Downs, Peachtree Cafe, and Azio. He then moved into the corporate office where he became the liquor buyer for the chain. He took a turn, too, running his father’s business, selling restaurant equipment. It was also in Buckhead, at Hal’s, where Andy met his future wife, Ann Simpkins.

During the 30+ “Ann years”, Andy went into the wine business. He became even more well versed in wines and especially loved Napa Cabs. His contacts provided numerous trips to Napa Valley (and yes, he played golf there too!), and Ann’s customers had so much fun playing golf with Andy that they began asking that he come with her on business trips, where golf was always a given. This allowed him the great pleasure of playing in 20 states including Alaska and Hawaii. Pinehurst, Pebble Beach, Sawgrass, and many other courses were blessed with his pretty good game; but he was never able to finagle his way onto Augusta…but perhaps his ashes will!

His family was his greatest love, but golf was his passion. He was a regular at the Lexington Country Club’s seniors’ group and previously at Morehead City Country Club in North Carolina, where he got his only ever hole-in-one. He also loved cooking, gin martinis, crossword puzzles, spending time with his grandchildren, and watching his favorite TV show, Tucker Carlson Tonight, with his faithful cat, Calvin, by his side.

Andy was well known for his quick-witted humor, fierce determination, and pursuit of “The Perfect Day”, (golf, martinis and something more personal). But he also had a softer side. From walking a crying baby around the restaurant so the parents could have a hot meal, to pushing his Dad in a wheelchair around a restaurant show so he could see his old buddies one more time. When Ann came home after a visit with her Mom on the coast of NC, and described her Mom crying about wanting to leave Assisted Living and live in her home again, Andy said without a moments hesitation, “We have to move.” He left a job he loved just like that so that someone else could be happy.

A Memorial Service to celebrate Andy’s life will be held on January 15, 2023 at 3:30 p.m. at Lexington Country Club, Lexington SC. In lieu of flowers or the plant a tree program below, the family requests that donations be made to The Friends of the Lexington Main Library to be given to Book by Book, a program that gives free books to children who need extra help with reading. https://www.paypal.com/donate/?hosted_button_id=HZ4YZ68YPDV6J