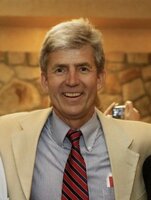 Richard Vincent Sayers, age 67, of Broomall, PA, passed on May 31, 2022 after an unexpected and tragic bicycling accident.

Richard was a graduate of Temple University in 1977. He was a member of the on-campus Television Studio where his passion for capturing moments in life through the view of the lens as a career began. This experience led him to interning at the Philadelphia Channel 6 ABC station and from here he established a successful career as a Technician/Chief Videographer at CBS, Inc., WJZ-TV13 for more than 35 years before retiring in 2019. Rich was an exemplar of dedication, professionalism, and creativity. He was the recipient of multiple local Emmy awards for his stories throughout his career, recognized for his presentation and framing. During his time with WJZ, Rich helped establish Home Team Sports with its inaugural year and continued his freelance work as a videographer/editor/lighting director by providing his expertise to MASN. He provided his talents to all facets of Baltimore sports ranging from the Orioles, Ravens, Terrapins, and the Blue Jays. Rich’s most memorable pieces were those that touched on people’s personal challenges and the human conditions that connect all of us. He stayed in contact with a number of individuals and families over the years where he made a personal connection through a story, and would seek out their well being and offer additional assistance if able.

Outside of his professional endeavors, Rich was also an accomplished high school and collegiate football referee. He was active at both levels and officiated games over a multi-decade span that had him traveling to Ohio, New York, New Jersey, Virginia and every corner of Pennsylvania. Rich also extended his professional experience to students by becoming an adjunct professor for Stevenson University where he helped them explore and expand their knowledge in the visual arts.

Rich was the father of two sons, Matthew and Andrew, who were born in 1979 and 1985. He raised each of his sons to be strong, thoughtful, kind and compassionate men. He was able to find time to coach both baseball and basketball during their earlier years, then transitioned into a passionate supporter as the boys grew older. He was always there to provide an ear or a shoulder to lean on during tough decisions, and never shied-away from a difficult conversation. Rich was always willing to provide his perspective, and would solicit a response from others to make sure it was an open and honest dialogue. This open communication and connection stayed strong even as his boys moved south of the Mason-Dixon line. Rich would have a keen sense when they had not connected in a bit and would plan a trip or a call. Eventually he found himself further south as well in Columbia, SC where he began to establish himself post retirement.

A large part of the next stage of Rich’s life was rooted in his exploration of his spirituality. Rich was very involved prior to moving to SC at St. John the Baptist Catholic Church in New Freedom, PA. He and his former wife helped to establish faith in their boys here as well. Rich engaged with the church in many facets from being an Extraordinary Minister providing communion to members of the community, to helping people in their journeys to become Catholics with his involvement in RCIA/RCIC, as well as being a member of the Knights of Columbus. Rich also helped youths of the parish become more involved through their many programs. He supported the endeavor to create a men's program, That Man is You, that gave an outlet for men to gather in faith and confidence to find their path with God through life.

After relocating to SC, Rich was actively involved with three local Catholic parishes, the Basilica of St. Peters, St. Josephs and Our Lady of the Hills. He not only assisted them with their Men’s program but also shared his technical expertise to stream their services. He made many beautiful connections and memories with individuals during his retirement in Columbia. Rich loved to share his time helping others and was a dedicated volunteer with the St. Vincent de Paul Society and serving the homeless.

In tandem with his search for spirituality, Rich became a grandparent to first Logan and next Lila and took on the name “Pops” with honor. The welcoming of his grandchildren was one of the moments Rich enjoyed most in the latter stage of his life. Whether it was dropping in for a quick stop to hear how school or a game went, having a quick trip around the neighborhood on bike or foot, or going on a nature walk in one of the state parks. He was always providing a ride for Lila on his shoulders or taking a picture with Logan. He and Logan were able to share a kinship surrounding photography and both submitted their work to the SC State Fair where Logan was able to win an award and share this moment with Pops. Rich continued to share his talent taking pictures of sporting events and becoming a pseudo team photographer for all parents and families involved in Logan and Lila’s teams. Logan and Lila would look forward to the extra levity and fun for the holidays and birthdays with Pop’s silly hats, eyeglasses or light up necklaces.

Rich is survived by his sons, Matthew Sayers (Elizabeth) and Andrew Sayers (Sara); his cherished grandchildren, Logan and Lila; his dearest mother, Cecelia Drum; and his loving siblings, Mary "Mickey" Sayers, Sheila Breen (Gary), Teresa Aldridge, Karen Czarnowski (Brian), and David Drum (Curtis), as well as his many nieces and nephews. Richard was predeceased by his father, of which his name came, as well as his beloved sister, Vicki Gerstenfeld (Lee).

Rich’s abrupt departure has left everyone he knew with a deep and penetrating sorrow. He always encouraged those he knew to make each day a masterpiece.

In lieu of flowers, please donate to St. Vincent de Paul Society or consider supporting a child through Unbound via a donation or sponsorship, as Rich had.